Confession: Like most thirty-somethings, I desperately wanted to be a “Kelly Taylor.”

I dreamed of the convertible, the snappy comebacks, the perfectly blonde wispy bangs, and, of course, those color-tinted self portraits to hang over my bed. But try as I might, it was never really me. After all, I don’t live in Beverly Hills proper (the term “Beverly Hills Post Office” is a real thing, and it’s basically the equivalent of a geographical Scarlett Letter) and I never managed to secure a cocaine-addicted boyfriend who was arrested after being the subject of a televised freeway chase.

For a while I considered that perhaps “Brenda” was my spirit animal. I’m an over reactive brunette with Midwest roots, who also happened to dabble in high school theatre. But my parents? They ain’t nothing like Jim and Cindy.

The hard truth is this: I am and always will be a “Val Malone”; the feisty outsider who arrived to 90210 a little late to the party, attempted a splashy debut in order to make Beverly Hills feel like home and then was charged with prostitution. OK, so maybe the last part isn’t exactly a parallel, but we’ve both been the subject of some misconceptions and sported a short, sassy bob.

So this long lead-up was a foiled attempt to delay the inevitable sharing of some news:

After six-and-a-half years, my husband and I have packed up the only home we’ve ever known as a family—our first home!—and are moving on. Ok, so we hired people to pack for us, but I was totally diligent about supervising (I mean, such a Kelly moment!).

While I wouldn’t necessarily consider myself a gypsy (I much prefer stability and structure), I’m not overly emotional when it comes to moving. After four years in New York City, I pulled the rip cord without ever looking back. I don’t drive past my old apartments with any sort of nostalgia, and I never attempted to recreate the final scene of a sitcom where the main character stands in the doorway and, before walking out, glimpses back over his or her shoulder for one last look of the now empty room.

But this time, it’s completely different. This is the first time I’ve ever moved as a mom…and it’s scary as f—k. Aside from the actual logistics of packing up our lives, and uncovering what has been living at the bottom of our “garage freezer” for the the past half-decade, leaving this house is emotionally taxing. 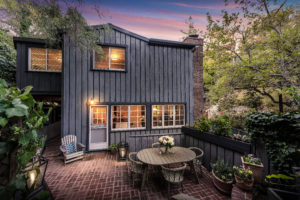 Truth be told, I’ve wondered a few times throughout this process if we made the right decision. For the past six years, we’ve lived in a beautiful bungalow in Benedict Canyon. It was built in 1948 as a writer’s retreat, and has a cool Hollywood history. (Previous owners include one of the producers of The Godfather movies, and a series regular on The Office, who put a ballet studio in the garage. Urban legend suggests that Harrison Ford did all the carpentry throughout the house before becoming a mega-star, and our daughter’s nursery once played host to a woman who found herself at the center of a very public political scandal.)

It’s a wonderful home, and it’s been really good to us. It’s where my husband brought home my beloved Archie as a 30th birthday present (a rescue doodle with serious anxiety and cat-like tendencies). It’s where we hosted our friends for fierce rounds of “Catch Phrase.” It’s within these walls that my husband and I received bad news, and had tough conversations. It’s where we cried (me much more than him). It’s also within these walls where we first learned that we were having a baby, and where we planned, prepped and panicked for her arrival. It’s where I washed every single one of her “socks that looks like shoes” and where my husband illegally painted our front curb red so my pregnant ass could waddle in and out of our front gate with ease.

It’s where we brought her home for the first time. As any mama can tell you, bringing your baby home is a life-changing experience. I carefully climbed the wooden staircase to our front door while clutching the plastic handle of a car seat, in which Tallulah was nestled tightly, and rested it down on the front porch so she could meet Archie for the first time. It’s where my husband and I learned what it meant to be parents, and a family. 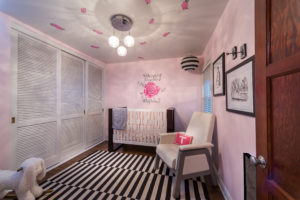 Tallulah is two-years-old, and it breaks my heart that she most likely will never remember this place. Ok, so Lord knows I’ve taken enough photos of her here that she’ll have a hard time forgetting it…but I really wanted her to have memories of her own in her very first home. Pretty much every memory, milestone, setback and victory that we’ve had as a family of three (or five, if you’re counting the doodles) has been within these walls. And being “a family” is the single greatest joy in my life…besides Sauv Blanc…and Vin Diesel.

And, if I’m being totally transparent, we want our family to grow (eventually), so moving on is essential.  We need space, and preferably easy access to a beach. I want to be able to open my back door, and have a yard where my dogs and daughter can play. I need another bedroom, in case we are blessed with another person some day, and I would love a big family room where we can all hang out and argue over what to watch on television.

My beautiful, little Beverly Hills bungalow can’t give us that, so we have bestowed her to a new owner, and another iteration of her near 70-year life.

Sure, I won’t miss having to go outside to do the laundry, or making a three-point turn to get my SUV into the garage, but those have always been champagne problems.

I don’t think I ever felt like a real adult until I became a mama, so its been within these walls that I actually grew up. The privilege of being my daughter’s mother is the most tremendous honor of my life, and it has been here where I was gifted that tremendous blessing. I can’t imagine having done it anywhere else.

But in those moments when I’m feeling a tad bit weepy, I think “What would Val do?” I pull back my shoulders, lift up my chin, say to myself “suck it up, buttercup” and then scan my iPhone contacts for “Ray Pruett.” We could never have lived in these place forever, but the memories and moments I will always carry with me. I can, however, take with me three crystal knobs that broke off during our move. Awesome.

As for what’s next? That remains to be seen, but I know that there will be a new home with new memories, and, with any luck, an equally large walk-in closet where I can stare longingly at the beautiful heels I never, ever wear.

Thanks for reading along on this vent session, and if you have any last tips for moving or fun ways to bid adieu, please share in the comments below!