It’s been a year, to the date, since I announced the birth (pun intended) of Unpacified, a modern motherhood platform designed to speak to women about their parenting journey in this new era of feminism. While it wasn’t until three months later that I expanded Unpacified into a writing community, the concept for this little passion project had already been released to the world.

And you know what they say…you can’t un-spill the milk. And the milk this year, got spilled…all the f–k over. (More on that further down.)

I knew that planting this seed publicly would force me to be accountable for it—and I have been. At least, I think I have been. At it’s inception, Unpacified was about nurturing a community of mamas looking for honest conversation and a filter-free look into the world of parenting. It was about taking off the rose-colored glasses and having real dialogue, without judgment or hyperbole. It was a place where we, as mothers, didn’t wonder if our glass was half-empty or half-full, because… DON’T ASK QUESTIONS, JUST POUR ME MORE WINE.

And it has…I am forever indebted to each of you, because Unpacified has truly changed my life.

That may sound like a convenient cliché, a yawn-inducing mommy blogger “ism,” but I very rarely say shit I don’t mean…which often gets me into trouble.

In the beginning, I was hesitant to open up my home, my writing, my daughter and even my husband…who still only makes the occasional cameo. (But that’s just because he insists his star is too bright. He fears that appearing on social media will catapult him into a stratosphere of Social Media fame previously reserved for Kardashians and maturing YouTube stars. To hear him tell it, “Instagram isn’t ready for Yash.” Like, I can’t even with this kid…)

ANYWAY…As any mama who works the IG scene knows, putting your child and yourself out there for public consumption is a real consideration! Fortunately, I have an amazing friend, who just so happens to be one of the best photographers around (EMMA FEIL), to help me look my best. (Even so, as I’ve gotten older, I’m getting a lot less “Kelly Kapowski” and a lot more “Aunt Becky”. I’m actually super flattered either way…and neither of which do I deserve.) 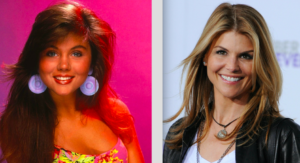 It was a scary world to enter for anybody, but I had a particularly hard time making the decision. I’m the type of person who compartmentalizes her world. I always have; there’s a full psychological breakdown but I won’t bore you (or scare you). Basically, everything and everyone has a place, and there isn’t much crossover. I’m not sure if that’s a good or a bad thing, because it’s served me well, just as often as it hasn’t…although it kind of sounds like I may be a serial killer.

Either way, it’s just the way I operated–even when it came to my writing. Despite all the articles, essays and books I’ve had published, I have a lot of writing that I’ve never shared…with anyone. Launching Unpacified also meant I had to share stories about my motherhood journey that were real and honest and not always complementary…and that was terrifying.

At the end of the day, the response has been overwhelming. I realized that nothing about what I was experiencing was unique. You let me know that you could relate. You understood what it was like to struggle as a new mom with balance or identity, or the pangs of judgment, or the horrible guilt you feel when you just want to quit it all.

I offered my world to you, and you offered it right back…. Thank you. So much. Because I needed to feel that. I needed to believe that. Because as much as this past year growing Unpacified has been one of the most rewarding and most successful experiences of my life, it’s also been a year of change, struggle and heartbreak on a more personal front. And because of the remarkable and humbling response you all so graciously offered me to this part of my life, I mustered the courage to battle through this hardship.

I won’t share the details, not because I don’t trust you, but because it’s not my story to tell. Long story short, my world got rocked this year.  And I’m not just talking about The Rock being named Sexiest Man Alive. (Although, that was a real highlight).

Unexpectedly, I found myself in the center of a shit storm and for some reason I was the one driving the car. It’s like that scene in Twister where a tornado brews out of nowhere and then all of sudden there are fucking cows flying across the road. I mean…COWS.

Jokes aside, I’ve been through shit before, but this was a situation that caused me, for the first time in my life, to really challenge who I was. Why was I so guarded? Why was I so angry? Why was I so damn self-destructive? I was punishing myself by continuing to hold on and mourn things I didn’t even care about anymore. Why? I was creating situations to be upset about…and dragging people along for the ride. Which is bananas. (For the record, I know this must sound a little bit cuckoo but I am not pretending to be easy or breezy. I’m legit crazy.)

Before I could manage what was going on around me, I had to unearth some of my own BS and self-reflect in a really meaningful way….and I was able to, but only because I had the support of those closest to me…because I asked for support…because I shared.

It’s funny: I thought Unpacified would be a distraction from it, but it ended up becoming my salvation. It’s allowed me to open new doors, and close certain door…and bolt those fuckers shut. I have been able to find my way through and develop this amazing sense of who I am, what I want and how I see my future. I’m not going to apologize for who I am…but I never really did that anyway. I don’t have the time or patience to dance around my heart anymore, and, frankly, I don’t have the time or patience for anyone undeserving of it. That ship has sailed; those days are gone.

I’m really f—king happy, and that’s such a gift….

So while Unpacified was never intended to be just about me, I am humbled on this occasion to thank you all for giving me something that 35 years on this planet couldn’t give me… a good kick in my ass.

I am SO excited for what’s to come. I am so honored to share this piece of my life with you.