For me, some of my favorite childhood memories include bright, cheery parties with bundles of balloons and, of course, a colorful funfetti cake piled high with frosting. I’m pretty sure Julia Child said it best: “A party without cake is just a meeting.”

With summer coming to an end, children all over are getting ready for a new school year. While my daughter doesn’t start preschool until next year, the beginning of fall marks a new season of music courses, tumbling and pre-preschool mommy and me classes. Growing up, I began every school day with a heaping bowl of my favorite cereal: Count Chocula. (It really is the best).

After spending most of last year working on the party planning book Celebrate (with my good friend and ultimate hostess with the mostess, Lauren Conrad), I learned a thing or two about throwing a really beautiful, really fun gathering. Since these days it’s hard to come up with a truly original themed party (anything you can imagine has most likely already been Pinterest’d), I like to reimagine some of my favorite traditional treats with a new, unique twist!

To celebrate the beginning of the school year, I decided to host a “Cereal Soiree” for some of Tallulah’s friend and their mamas. And since all of my favorite cereals practically double as candy, I concluded that a cereal- inspired dessert buffet was definitely in order. 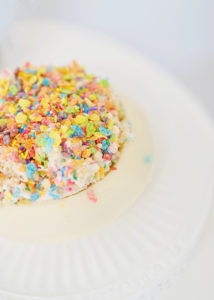 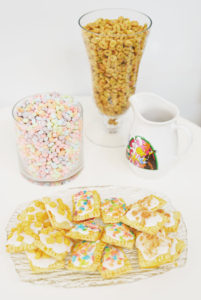 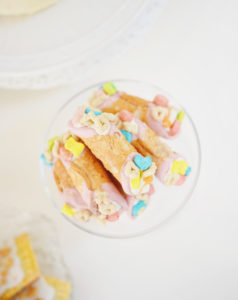 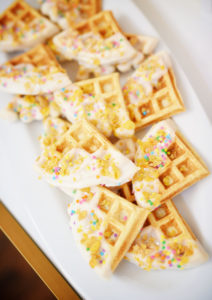 With the help of my friend and the most phenomenal baker ever, Lauren Lowstan of A Sweet Savory, I came up with a festive, candy-coated treat menu.

Because nothing is better than Lucky Charm marshmallows, I made sure to offer an apothercary jar overflowing with the sugary treats, as well as Funfetti Donut Cap’n Crunch (who knew that was a thing!?). These were dangerously easy for the little ones to get their hands on! 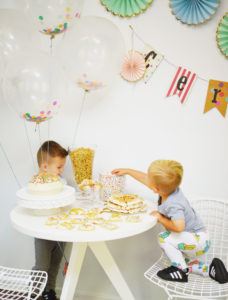 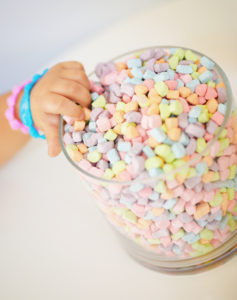 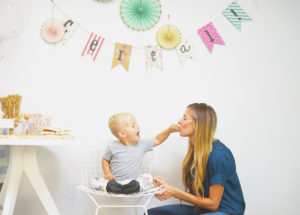 For décor, I wanted to play off the pastels of the Lucky Charms. I reworked a “Celebrate” banner that I picked up during one of my Paper Source hauls to say “Cereal!”  Beautiful paper fans and confetti balloons are pretty much standard fare for any party, and these ones from Meri Meri don’t disappoint. While the balloons are one-time deal, the fans are really great paper stock, so they can definitely be stored and used again for our next soiree. 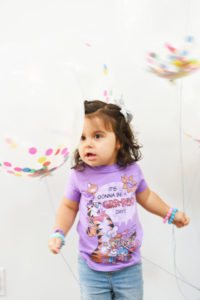 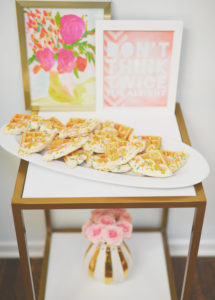 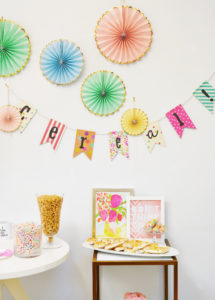 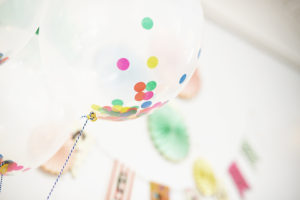 I got Tallulah and her bestie Stella vintage cereal themed Junk Food tees as well as found a retro milk pitcher with the cast of characters. 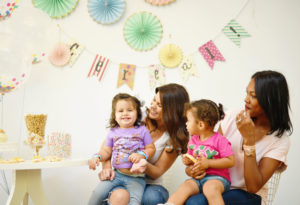 While the girls were more dainty in their eating (and sharing!) Colson and Nixon dug RIGHT in…and even decided to make the Rice Krispy treat cereal bowl a smash cake!Stella focused most of her snacking on the Funfetti and Frosted Flake Waffles while Tallulah stuck to the basics and grazed the lucky charms supply. For me and the other mamas, the jelly filled pop tarts were a huge hit. 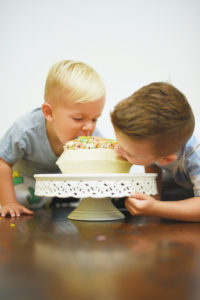 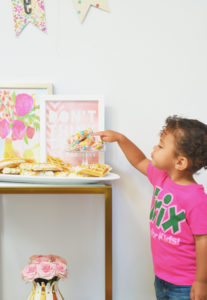 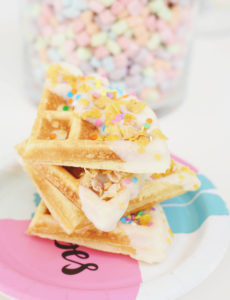 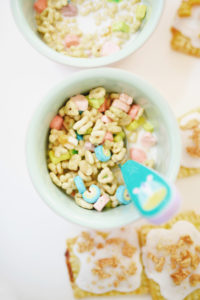 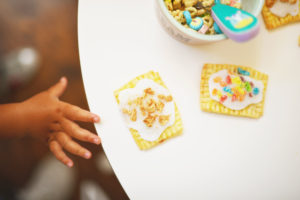 I wanted to add some fun, bright décor to the dessert bar for an unexpected pop, so I used these two great prints. The floral watercolor print is from the Oh Joy for Target collection, and the Bob Dylan quote is one of  my all-time favorite Etsy finds. I don’t know about you, but when I’m considering a second (or third!) helping of desserts, I’m definitely want to be reminded of this: “Don’t Think Twice…It’s Alright.” 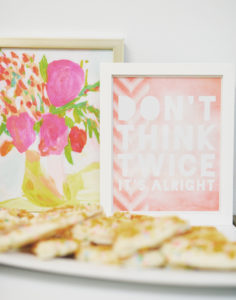 This party first appeared on stylemepretty.com