There are three things that scare the absolute shit out of me:

Unfortunately for me, air travel is pretty unavoidable. And now that I have a child, the anxiety-inducing experience has somehow become even more stressful. If I’m alone, I’m panicking about being away from her, consuming mini bottles of lukewarm chardonnay and wondering:

Will my husband remember that she likes her sound machine at exactly 75% volume? Does he know which Daniel the Tiger episodes to avoid because she has an inexplicable aversion to Prince Wednesday? Will my baby even remember me once he moves on and remarries some fringe-laden hipster girl named Comet or Vixen? (I’m literally just naming reindeer, aren’t I?)

If she’s traveling with me, I’m giving myself a verbal lashing for deciding it was a good idea to tote my daughter three miles above the earth and wondering how the hell I’m going to keep her entertained while I white-knuckle it through take-off.

I admit that prior to having a baby, I was that shitty passenger on the Southwest flight who avoided an open row just because it was behind a seemingly cranky baby, or who was silently praying that woman with the infant didn’t choose the seat next to me. I was a douche. I know that. (And I’ve been made to feel even worse about this after watching this truly amazing, earnest JetBlue video that causes me to seriously sob. I’m such a mess).

But my douchebaggery wasn’t because I wasn’t empathetic to the woman flying solo with a newborn, it’s because I wasn’t even thinking about her; I was more concerned with my own comfort. Which seems to be the real problem…everyone else is thinking about their own needs and concerns, so why can’t a new mother? Why is it that because she had a child, she now must first and foremost focus on the comfort of everyone else, instead of doing what she needs for her tiny, helpless little person?

When Steph Mignon (a writer and new mama) reached out to me about her experience traveling to Hawaii with her then 3-month-old daughter, I knew I had to share it with all of you. She doesn’t just answer the question above, she straight knocks it out of the park… 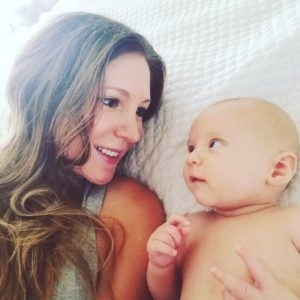 “When my daughter was almost three months old, my husband and I decided to take a trip to Hawaii.

Like many new mothers who would travel for the first time with a baby, I was terrified.

What if I had the kid that kept everyone from feeling the Aloha? You know the one. The baby on the plane who does not stop crying. FOR HOURS.

I mean, my daughter was borderline colicky, wailing it out at the witching hour with the worst of them. It was horrible, and confusing, and exhausting, but it appeared she was finally growing out of it. I hoped. But what if she wasn’t?

Babies are unpredictable. In three months of mothering, I didn’t know much, but that was one thing I knew for sure. There was a fifty-fifty chance that baby girl would freak the f out. The noise. The altitude. All the strangers. Plus, I worried that my fear of flying would somehow rub off on her.

So, I decided to follow the lead of an adorable Pinterest photo I’d seen. I put together consolation prizes for the poor passengers seated next to us.

The night before our trip, I spent hours filling plastic baggies with tootsie pops and ear plugs. I wasted entirely too much paper in my attempt to get the font size just right on the note I included, the one apologizing for any crying before it happened. I sacrificed valuable sleep to preemptively make my fellow travelers a little more comfortable. 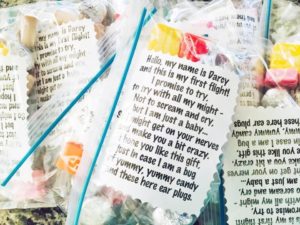 But, of course, no ear plugs were necessary and my kid was a glowing example of what traveling with a child can be like. Easy-ish, all the gear and diaper changes in small spaces aside.

So when I recently saw a mom friend sharing pictures of the in-flight, I’m-sorry-my-kid-might-cry goodie bags she made, practically identical to my own, and likely also inspired by some Pinterest travel board somewhere out there on the internet, I started thinking.

I started thinking about how there’s always that anonymous passenger, who isn’t owning up to passing terrible gas in a SEALED METAL TUBE. When’s the last time he or she passed along a goody bag of nose plugs and sample perfumes?

In my decades of flying, I’ve never once been offered a free drink because my neighboring passenger is larger than the seat allows and his or her arm is therefore protruding into my designated space for the entirety of the flight.

Or what about the elderly passenger in the wheelchair? The one who gets to disembark before everyone else. Sure she holds up the line, and probably pisses a few people off who are on the clock to make a connection, but you don’t hear her grown children asking the flight attendants to make an announcement thanking everyone for being decent human beings…and nor should they.

Because…. People fart. People gain weight. People get old. And you know what else is a natural part of life? Babies. And babies cry. Sometimes a lot. It sucks. But that’s the way it is. And the fact that babies cry definitely doesn’t warrant dirty looks and parent shaming. Nor does it require consolation prizes.

Recently we had some people staying at our vacation rental. When they arrived, I asked the typical, “How was your flight?” question. They replied with a rant about a brat on the plane who wouldn’t shut up and the brat’s incompetent parents.  Okay, so they didn’t say that exactly, but they might as well have. It was clear they took personal offense to the crying baby and the miserable people who made it. Sure, this couple was just being honest. I’d probably have said something too, if asked, but with empathy and concern for the poor parents and their unhappy child. Because had it been an obese person they were seated next to, giving them a little less leg room or something, I highly doubt they’d have had the audacity to vent about THAT with such obvious disdain. Kids and their parents seem to be the one group left available for bashing without fear of unleashing the politically correct police.

I think we’ve come a long way from the “Children are to be seen, and not heard” generation, but I think we still have a long way to go in building the new village. I picture the new village as one in which we have understanding and patience and respect for the littlest among us. Their crying included. Clearly there’s work to be done to foster a culture that is kind to those that might slow down the herd or, God forbid, prevent you from enjoying your airline peanuts in silence, if that’s what you call the sound of turbo jet engines.

I know the issue of crying babies on airplanes seems like an inconsequential one in a news cycle of racially motivated violence and terrorism, but this matters too. Being tolerant of the inconveniences imposed upon us by those that further the species, and being kind to the people who choose to raise them is important. Just remember, that baby on the airplane you wish you could gag with your neck pillow, might be wiping your behind in the rest home someday.

In addition to tolerance, the world needs a little more sweetness. And if my now three-month old’s adorable, innocent face doesn’t do it for you. Maybe a tootsie pop will.”

Much love to Steph for sharing her story! Be sure to check out her very entertaining (and honest!) blog, Steph Mignon.

This has got me thinking about things we can do to make traveling with little ones less stressful…for everyone involved.

What are some of your best tips and tricks for traveling with a baby?