I’ve always had this sort of love-hate relationship with playrooms.

I really like the idea of having a designated space for my daughter to “be a kid” in…and to store the ridiculous number of toys she’s managed to collect. Having a play area ensures that her bedroom is only for sleeping, that her Legos stay off my bedroom floor (and out of my way as I shuffle around in the middle of the night), and, in general, allows for an overall tidier home. However, I find that playrooms are often cluttered, messy, and aesthetically far too cheerful for my personal taste. (Yes, my heart is black.) 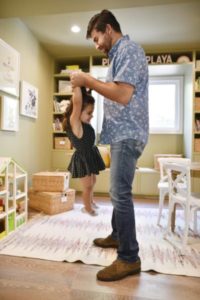 When my husband and I started renovating our new home, we debated adding a play area for our three-year-old daughter. We had an oversized guestroom off the kitchen that could easily be parceled out into two smaller spaces and I liked the idea of having a playroom near the common area so I could keep an eye on her while making dinner, sending out emails, etc.

On the flip side, that meant I would constantly be dealing with the aftermath of my little Tasmanian devil who has an affinity for all things glittery, loud and fluorescent. Not to mention, anytime we would have guests over, it would be front and center and a playroom doesn’t necessarily lend itself toward that “Scandinavian Minimalist” vibe I was hoping to achieve. I wanted the convenience, but not the headache.

Luckily, I was working with an amazing interior designer, Jesse DeSanti of Jette Creative (a fellow member of heymama and toddler mom herself), who understood my struggle. I wanted a playroom that could be both highly visible and totally invisible; it needed to flow with our overall aesthetic, but still be a fun, cozy, creative space for our little girl. Jesse noted, “Since you’re able to see the playroom while in the common areas, the design had to work with the rest of the house, but still feel unique.”

First, we wanted the color of the playroom to set itself apart without competing. We considered a few choices in the green/khaki family that would be happy friends with the blue cabinets in the adjacent space.

When designing a playroom, it’s easy to fall into the trap of what a playroom should look like.  In my head, if it wasn’t floor-to-ceiling Nick Jr. or Disney, I was somehow doing my child a disservice—after all, shouldn’t a playroom actually be playful? I was allowing myself to get bogged down by what I thought it should be. While her current preference is cotton candy pink, it may not be in six months. The sage color we chose felt whimsy and warm, but wasn’t distracting. It’s also gender neutral in the event that we add another person to our family who maybe isn’t a girl, but, in the meantime, we can play up frilly aspects with accessories (i.e. a Unicorn bust). By painting everything the same color, including the ceiling, we were able to create a little cave for her. When it comes to small children, a large play space can be overwhelming, so we wanted to keep the room cozy and manageable (which also means less for me to clean up).

My gut instinct was to include some huge element: a tent, a swing, a miniature carousel of woodland creatures…something! Jesse reminded me that the room needed to transition not just over time as my daughter got older, but it also had to transition, quite literally, from one room to the next. The first priority was designing a pretty, but functional space to house her ever growing collection of Paw Patrol figurines. Jesse explained, “Storage is always an issue in any kid-friendly area, so we wanted to create a space with a lot of options for tucking away any unorganized boxes, torn apart coloring books and some of those bright, plastic toys that an adult might not want to always stare at. A playroom doesn’t need a ton of accessories and it doesn’t need to be over-designed; kids move too fast to design around any one moment in their ever changing lives (and preferences!).”

Originally, we had four drawers along the bottom, but I requested two more because I wanted the luxury of having more hidden storage. Each drawer is oversized in height, depth and width, which is my favorite feature in the entire house, because it makes it so easy to store all those bulky Fisher-Price birthday gifts that my daughter loves (even if I don’t). When it came to the hardware, Jesse made the leather pulls herself. We knew they would get a lot of use, so we wanted something easy for Tallulah to grab but nothing that she could potentially break.

Since my daughter is a little bookworm and loves to cozy up for story time, the window seat felt like a special feature without being too dramatic; and it’s just the right height so she can crawl up herself. The coolest part about the design is that Jesse took careful consideration in planning for the space’s future use, which isn’t something I wouldn’t have thought about on my own. As is, the area can easily be transitioned for a totally different function (a craft room, a study, etc.), but she also considered that perhaps one day it would need to be used as an additional bedroom. The width of the window bench is the exact width of a queen bed, while the shelving  depth is that of a standard clothing closet.

It’s easy to overdo it when it comes to any sort of auxiliary space, but keeping it simple was the best way to serve everyone, and the same went for the decor: a few rattan baskets for baby dolls and puzzles; a hearty rug from World Market that could handle the high traffic, but also wouldn’t break the bank when I’d need to replace; a few pieces of Minted artwork to add a playful twist, and, of course, an arguably inappropriate “Play On, Playa” letter sign because…why not? The biggest splurge in the room was the table and chairs, and even those were a steal. (If you haven’t heard of the Restoration Hardware yearly warehouse sale then consider yourself served.)

Keeping the room relatively neutral has been a blessing for us all. It’s become a family space we all enjoy, and allows Tallulah the creative freedom to make it her own: a pretend kitchen one day, a princess tea party the next day and an arts and crafts studio the day after that. It’s much easier to swap out accessories and art than it is to remove the built-in pirate ship my husband suggested. And because we took our whole family into consideration when designing the space and added features to make it an easy room to manage (as a mom), I actually don’t mind it being prominent when we’re entertaining; however, that’s also probably because we largely hang out with other parents…and their kids. 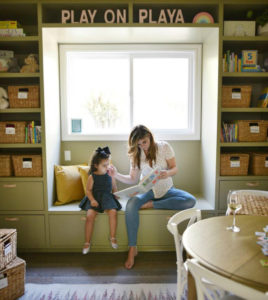 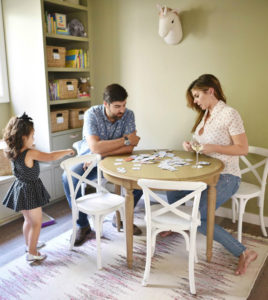 However, in the event that we wanted the room to “disappear,” we added simple sliding doors to separate the playroom from the kitchen. It wasn’t just the least distracting way to close off the space, it actually looks like part of the wall when its closed. In a way, we figured out how to have our cake, and eat it too. Ironically, I still find Legos on my bedroom floor, but I’m pretty sure that’s just my own mom karma.